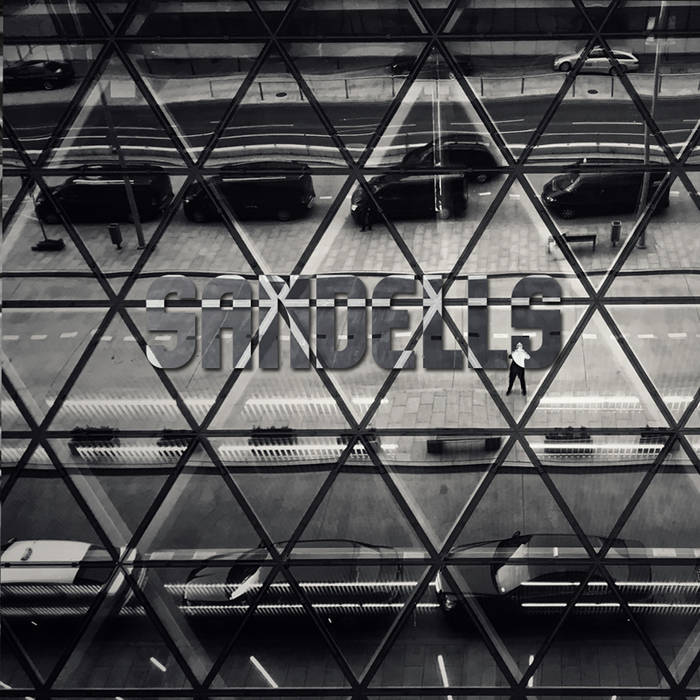 "Deep deep history, here, with The Sandells, who have hovered subversively for many moons. What?Noise's Julia Adamson, once a key member – and elements of those shades remain - although they are now a trim three-piece. Even allowing for the legacy of the 'power trio', this pristine Sandells sound is bigger...much bigger, fatter, oozing the confidence of maturity. This is loud. Much of it, anyway. Underpinned by the driving drums of Brian Benson, we find an extraordinary Gilmour guitar ( and keyboards...in fact, do I recognise those very ivories? ) from Johann Kloos and Tim Lyons, performing levelly with The Things, bossing the bass and vocals. They know how to stretch a song, these boys. Right from the astounding fuck-heavy opener, 'Alien Intelligence', they dig deep with the dirtiest bass I have heard since 1971...and what a year that was. (For dirty basses, anyway). I have heard more subtle tones on a Grand Funk Railroad album. Hell, I just drip straight into 'Cowboys Don't Have Brollies'. Daft title, I know, but you have just got to love the way the clunky opening 90 seconds is washed clean away by a thunderous kick-in that triggers a whole different world that just hurtles through the heart of the song. Yes, there is that keyboard, again. Weirdly tinkly in the overtone. Slightly, gloriously off-key in a ironic Una Baines way. But above it...above that, we find a Tim Lyons discovering the rock voice that perfectly balances his 2017 visual figure, closer to The Cult than Cabaret Voltaire, dark glassed and humming, like some kind of dark Californian drifter. You could meet him in a bar, one feels, and sink whisky-sours while chatting about the downside of everything. Indeed, that is pretty much how this album feels. It sinks beneath a night of heavy inebriation and flashes in and out of blurred vision. Almost at every corner of every song. There are even moments of Un-Mancunian rock-out. This is not from Chorlton. Later into the album, this stretches into a whole new area...not especially innovative but fantastically clever in the art of presenting ghosts of fading eras, fading genres, perhaps? For elements of this fine album sit comfortably in whatever Goth world – Berlin nightclub? - you might care to inhabit. There is a massive ball-blast section in the latter half of 'Reach' (track seven) that simply defies belief with – I presume – Johann – well known in these circles – extending the guitar soloing towards a Malibu sensibility. It's not a pose, but I have lived there, geographically and musically. You do get that here. A kind of weird if detached authenticity. A kind of rockist distance; the sense that this music comes from out-of-town. But I play through it three times and always return to that stunning opener. Those drums push the pace...forcing the song to some distant acre of field. You got to love it, really. I caught Tim in The Things recently, providing more than able support to the eternally underrated Monochrome Set at Gulliver's. It was an illuminating moment...two moments, but nothing on that fabulous night hinted at the gold intensity of this fine, fine, rock album. For that is what it is. Some kind of new dark dream, fired by amphetamine, if not Nurofen Cold and Flu. It is right there. Ageless and endearing. Beyond the sexual tug, but rewarding nevertheless."

"Can, Arthur Lee’s Love and Standells type psych are at the core of the Sandells sound but it goes off on Hawkwind and Post-punk tangents and all blurs into one very ger-oovy vibe indeed. There are probably seven shades and varieties of psychedelia on offer here – from Nuggets style stuff affectionately pastiche’d to Motorik Kraut groove via a sci-fi story-telling jazz-prog style -but all done with the kinetic energy of punk fueling the engine.

It has a deft lightness of touch even when they get heavy. Even when the songs exceed the six minute mark they still enrapture.

To be completely honest, I didn’t think this album was gonna be for me (too trippy and art-psych) but it took hold of my brain and convinced me that psychedelia can be fun, fast, varied, funny and ‘punk rock’ (maan).

In the same way as Scars turned A Clockwork Orange into a song; Horrorshow, The Sandells take Blade Runner as the inspiration for their song ‘Voight Kampff’ – which is a work of near-genius, opening with the question; “Tell me all of the good things you can remember about your mother?”.

The only instrumental Glissando -renamed NAC – closes the album but the other songs have titles like ‘Cowboys Don’t Have Brollies’ and ‘Alien Intelligence’ and cover all psychedelic bases. It is a great album to just get lost in. Eyes-closed, headphones-on, dead-time journey-music or rattling the walls, neighbour-annoyingly loud.

"think i've waited about 8 years for a sandells album...worth the wait"

Recorded in Belfast by Augustine Leudar.

All tracks produced by Johann assisted by Tim and Brian except tracks 1, 2 and 6 by Manu Arteaga, and track 8 by Augustine Leudar.

Bandcamp Daily  your guide to the world of Bandcamp